A Primer on John C. Calhoun

[N.B.  The best person to read when studying Calhoun is Lee Cheek, an amazing scholar and equally gracious gentleman.] 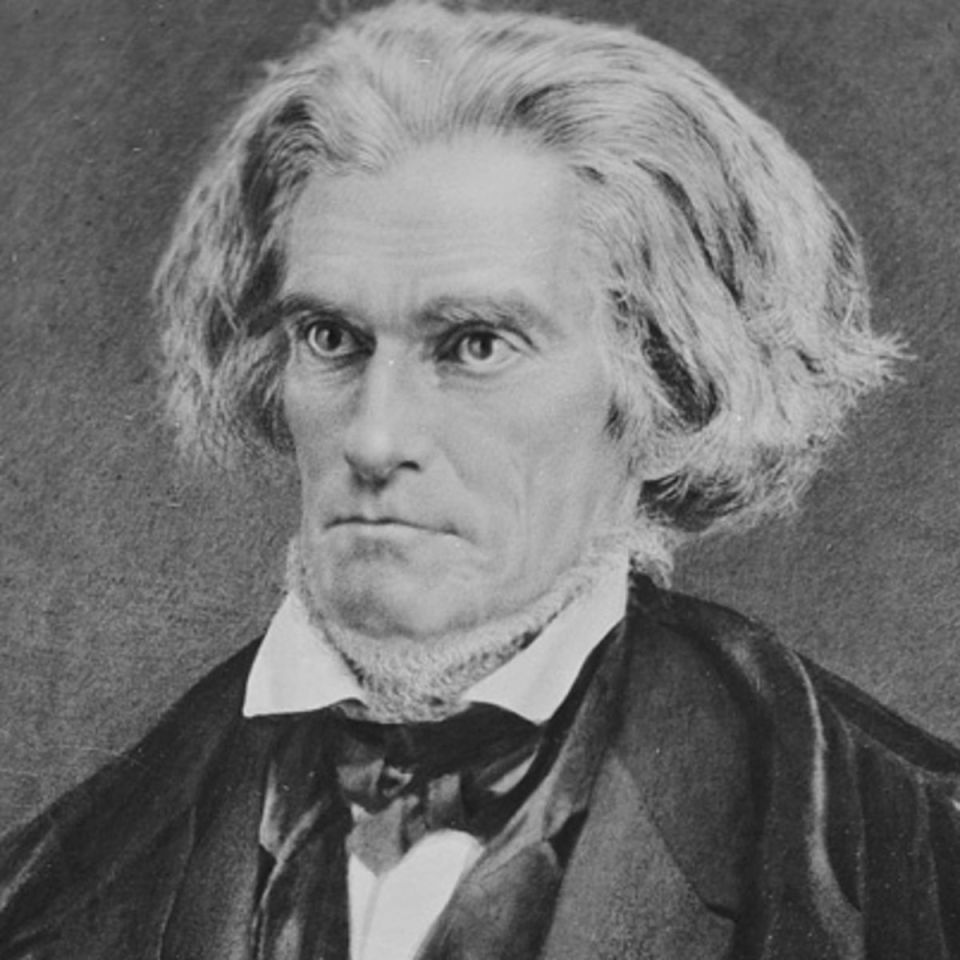 Pre-Compromise of 1820 Nationalism.  Early Nationalist/War Hawk Calhoun: “Let it not be forgotten, let it be forever kept in mind, that the extent of the republic exposes us to the greatest of calamities—disunion,” Calhoun warned as Secretary of War in February 1817.  “We are great, and rapidly—I was about to say fearfully—growing.  This is our pride and danger, our weakness and our strength. . . . We are under the most imperious obligations to counteract every tendency to disunion. . . . Whatever impedes the intercourse of the extremes with this, the centre of the republic, weakens the union. . . . Let us, then, bind the republic together with a perfect system of roads and canals.  Let us conquer space.”

Post-1820 Decentralized Calhoun.  His theory (very Roman republican and very Calvinistic) as most fully expressed in The Disquisition on Government.

“But such a state is purely hypothetical.  It never did, nor can exist; as it is inconsistent with the preservation and perpetuation of the race.  It is, therefore, a great misnomer to call it the state of nature.  Instead of being the natural state of man, it is, of all conceivable states, the most opposed to his nature—most repugnant to his feelings, and most incompatible with his wants.”

“Liberty must, and ever ought, to yield to protection; as the existence of the race is of greater moment than its improvement,” Calhoun wrote. Further, contra Locke, governments have no right to grant liberty, as liberty “is a reward to be earned, not a blessing to be gratuitously lavished on all alike,” but rather “a reward reserved for the intelligent, the patriotic, the virtuous and deserving.”

“Constitution is the contrivance of man,” Calhoun wrote, “while government is of Divine ordination.  Man is left to perfect what the wisdom of the Infinite ordained, as necessary to preserve the race.”

“It is manifest, that this provision must be of a character calculated to prevent any one interest, or combination of interests, from using the powers of government to aggrandize itself at the expense of the others.  Here lies the evil: and just in proportion as it shall prevent, or fail to prevent it, in the same degree it will effect, or fail to effect the end intended to be accomplished.  There is but one certain mode in which this result can be secured; and that is, by the adoption of some restriction or limitation, which shall so effectually prevent any one interest, or combination of interests, from obtaining the exclusive control of the government, as to render hopeless all attempts directed to that end.  There is, again, but one mode in which this can be effected; and this is, by taking the sense of each interest or portion of the community, which may be unequally and injuriously affected by the action of the government, separately, through its own majority, or in some way by which its voice may be fairly expressed; and to require the consent of each interest, either to put or to keep the government in action.”

A proper constitution must “give to each interest or portion of the community a negative on the others,” Calhoun argued.  “It is this mutual negative among its various conflicting interests, which invests each with the power of protecting itself—and places the rights and safety of each where only they can be securely placed, under its own guardianship.”  Such a negative would be a “veto, interposition, nullification, check, or balance of power.”

← A Conservative Reflection on the 2016 Presidential Election
Senator Rand Paul: The Best →