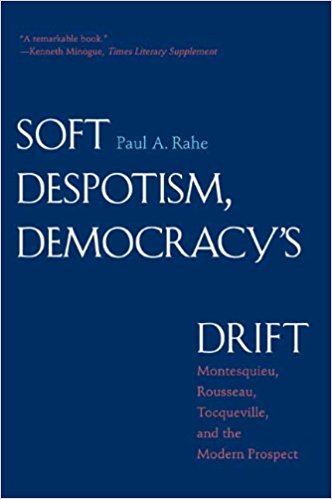 Thank you, Professor Schlueter for organizing this and for inviting me to speak.  Thank you, Miss Essley, for your kind introduction.

Professor Paul Rahe [professor of history and political science, Hillsdale College] is not a happy man.  Nor should he be.  From almost any perspective, the state of the world appears rather bleak.

Everywhere, we see an economy in tatters, a people uncertain, and a culture corrupted, perhaps beyond redemption.  Perhaps.  Stimulus packages, plans to add untold debt as a burden upon our children and grandchildren, and promises from the Federal Reserve to print money all should give us pause.

More immediate dangers exist.  Across the Pacific, a missile was launched this weekend from a regime we should have eradicated in the early 1950s.  We are now living with our previous errors in judgment.

We have a president who remains unworthy of the title.  The only man who can effectively lead his people, Thomas Aquinas, Robert Bellarmine, Francisco Suarez reminded us, is he who is willing to sacrifice himself for his people.  But this man in the Oval Office not only refuses to protect the weakest of Americans, he actually advocates the use of political and bureaucratic mechanisms to promote their extinction before even giving them the chance to breath their first breath.

What kind of upside down world is this?

Professor Rahe is right to be angry.  This evening—in his talk as well as in his new book, Soft Despotism, Democracy’s Drift (2009)—Professor Rahe ably and brilliantly outlines the decline of western civilization over the last several hundred years.  Unquestionably, Rahe has offered us a worthy successor to his profound magnum opus, Republics: Ancient and Modern.

In this most recent work, however, Rahe has placed much of the blame on relatively recent developments in the growth of the administrative state; this has been understandable (though regrettable) in Europe, but completely unnecessary and alien within the American tradition.  Rahe understands at a deep level the damage caused by the Progressives of the late nineteenth, the twentieth, and early twenty-first centuries.

But, de Tocqueville also understood how the democratic spirit within the American republic (and within the larger western republic of divided Christendom) could attenuate, overwhelm, and destroy the republican spirit of sacrifice for the community.   While a healthy republic must incorporate an aspect of democracy, this aspect must be balanced and limited.

In de Tocqueville’s argument, God has ordained the move toward democracy and equality as “a Providential fact,” but He has not predestined fully its form or shape.  Humans, as agents of God, can mould and delimit its force—creating either a democracy and equality of excellence or one of mediocrity or slavery.

Sadly, Tocqueville believed, democracy—because of the inherent depravity of man—easily serves to diminish man and liberty rather than elevate either.

“There is, in fact, a manly and lawful passions for equality that incites men to wish all to be powerful and honored,” the Frenchman observed.  “This passion tends to elevate the humble to the rank of the great; but there exists also in the human heart a depraved taste for equality, which impels the weak to attempt to lower the powerful to their own level and reduced men to prefer equality in slavery to inequality with freedom.”

And, later, in Democracy in America:

“I think that democratic communities have a natural taste for freedom; left to themselves, they will seek it, cherish it, and view any privation of it with regret.  But for equality their passion is ardent, insatiable, incessant, invincible; they call for equality in freedom; and if they cannot obtain that, they still for equality in slavery.  They will endure poverty, servitude, barbarism, but they will not endure aristocracy.”

On November 5, 1831, de Tocqueville met Charles Carroll of Carrollton, the only surviving signer of the Declaration of Independence.  Tocqueville found the 95-year old Charles to be quite impressive, claiming him to be informed, intelligence, and likeable.  As Tocqueville wrote in his diary, the old gentleman patriot, Charles Carroll, represented the end of a period in history.  “This race of men is disappearing now after having provided America with her greatest spirits,” Tocqueville lamented.  “With them the tradition of cultivated manners is lost; the people [are] becoming enlightened, attainments spread[ing], and a middling ability becom[ing] common.”[1]  Their conversation covered a number of topics, including the signing of the Declaration and the war for independence.  Charles also offered Tocqueville his views on government and democracy.

The general tone and content of his conversation breathed the spirit of the English aristocracy, mingled sometimes in a peculiar way with the habits of the democratic government under which he lived and the glorious memories of the American Revolution.  He ended by saying to us: ‘A mere Democracy is but a mob.’

One can only wonder—perhaps in awe—at how much Carroll influenced Tocqueville’s magisterial Democracy in America.  Certainly, one finds at least a parallel to Carroll’s understanding of the dangers of democracy and the need for a self-sacrificing natural aristocracy in the chapter entitled, “Why Democratic Nations show a more ardent and enduring love of equality than of liberty,” in volume two of Democracy in America.  “Men cannot enjoy political liberty unpurchased by some sacrifices,” Tocqueville wrote, “and they never obtain it without great exertions.”

In concluding his discussion of Carroll in his diary and notes, Tocqueville wrote, “The striking talents, the great characters, are rare.  Society is less brilliant and more prosperous.”[2]

True liberty, Tocqueville understood, always comes from hard earned and uneasily obtained sacrifices.  Historically, at least in the English tradition, such liberties have been claimed by the aristocracy through the restraints placed on the king—such as those obtained by the lords, temporal and spiritual, in 1215 in Runnymede.

With such a class absent in America after the founding, the republican spirit would have to struggle mightily against the encroaching leveling spirit of democracy.

Indeed, the republican spirit—service, self-sacrifice, and patriotism—must be renewed constantly in America’s people.  Much of this renewal, though, Tocqueville observed, comes through our formation and love of communities (each, in many ways, a little republic within a republic).

“As soon as several Americans have conceived a sentiment or an idea that they want to produce before the world, they seek each other out, and when found, they unite,” Tocqueville wrote.  “Thenceforth they are no longer isolated individuals,” he continued, “but a power conspicuous from the distance whose actions serve as an example; when it speaks, men listen.”

In an oft-quoted passage, Alexis de Tocqueville wrote in Democracy in America:

Americans of all ages, all stations in life, and all types of disposition are forever forming associations.  There are not only commercial and industrial associations in which all take part, but other of a thousand different types—religious, moral, serious, futile, very general and very limited, immensely large and very minute.  Americans combine to give fêtes, found seminaries, build churches, distribute books, and send missionaries to the antipodes.  Hospitals, prisons, and schools take shape in that way.  Finally, if they want to proclaim a truth or propagate some feeling by the encouragement of a great example, they form an association.  In every case, as the head of any new undertaking, where in France you would find the government or in England some territorial magnate, in the United States you are sure to find an association.[3]

As Robert Nisbet has reminded us, Tocqueville was a French Burkean who viewed community and its interaction with the individual as organic.  As for liberty, Tocqueville contended, the natural formation of voluntary associations allowed Americans to do for themselves what governments in Europe might do for their citizenry.  America, in this respect, was superior to Europe.  Governments and bureaucracies, Tocqueville claimed, are neither organic nor subtle.  They are unable to make nuanced or delicate decisions, as can voluntary associations in which “[f]eelings and ideas are renewed, the heart enlarged.”  Governments, try though they might, are incapable of changing the true morals or being of the individual.  “Once [government] leaves the sphere of politics to launch out on this new track,” argued Tocqueville, “it will, even without intending this, exercise an intolerable tyranny.”  Worse, the control of societal change and growth is a zero-sum game.  If the citizenry controls the power to make decisions, the government must be necessarily and proportionately smaller.  In a “vicious cycle,” the reverse is also true.  “The more government takes the place of associations,” Tocqueville wrote, “the more will individuals lose the idea of forming associations and need the government to come to their help.”[4]

In many ways, Professor Paul Rahe has the answer to the encroachment of the democratic spirit and ethos, within his own scholarship and in tonight’s speech.  To combat Demos, one must invoke the spirit of the res publica, of patriotism, of truth, and of beauty.  Or, again, to quote Tocqueville: “Men cannot enjoy political liberty unpurchased by some sacrifices, and they never obtain it without great exertions.”

One finds such sacrifices, of course, in the American tradition, with the assertion of republican virtue as an anamnesis, a forceful means to remind us of what is true and good: with men (well, ok, demi-gods) such as George Washington and the patriots of the Continental Army and militias; with Travis, Bowie, and Crockett at the Alamo; with William H.L. Wallace and his Illinois regiment at Shiloh, who died victoriously 147 years ago yesterday; and with those who served in trenches of France; on the beaches of Normandy; in the mountains of Korea; in the rice paddies of Vietnam and Cambodia; and with those patriots on a plane over clear Pennsylvania skies, one September morning in 2001.

More plausibly for us in this room, one can find it in a rigorous academic, a distinguished scholar, righteously angry at the state of his country, filled with the spirit of Jeremiah and Cicero—willing to employ his many talents and stand and be heard, warning us of democracy’s drift toward soft despotism.