IQ The Road Of Bones A review of Sorts 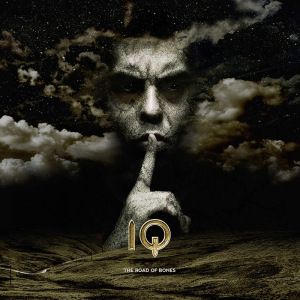 I am on Holiday. Having endured the drizzling rain and wind for the past month in the North of England, I am sitting in the sunshine of Lanzarote nursing a small beer and listening to some new albums. Usually when on holiday, I load up the I Pod with 1500 tracks, press shuffle and let it do its thing. A sort of radio station full of prog ( but with no DJ’s ) and not knowing what’s coming on next.

But this time it’s different. I am listening to full albums in their entirety. And not just once. Many times over. Serious listening. All in the Progarchy cause. In the sun. It’s a tough job but someone has to do it.

The first album up is     IQ  The Road of Bones. I listened to it on the Plane coming over. Noise cancelling headphones of course. Further listening’s over the last couple… 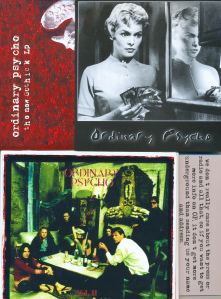 One EP, two LPs, and an insert with a mission statement. What they lacked in quantity is made up for, a million times over, in quality.

The English band Ordinary Psycho enjoyed a short but brilliant burst of life from about 1997 to 2004.

Their first EP, “Introducing Ordinary Psycho, Special Limited Discovery CD (With Marion Crane,” offered the world only twenty minutes of music. So well crafted, though, the music continues to speak to me after innumerable listens over the past sixteen years. Enjoying its pleasures as I type this piece, the music seems as alive to me today as it did in 1998. In 2000, they released their first LP, The New Gothick LP (sometimes just The New Gothic–without the k). A year later, they released their second and final LP, Vol. II. 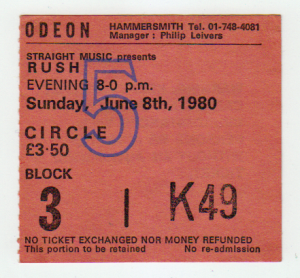 You know we’re havin’ good days
And we hope they’re gonna last,
Our future still looks brighter than our past.
We feel no need to worry,
No reason to be sad.
Our memories remind us
Maybe road life’s not so bad.

It’s been an immense pleasure and privilege to have you in my life for the last 35 of your 40 glorious years as rock’s greatest trio. On behalf of all Rush fans, let me wish you well and say that we are looking forward to more road life memories in 2015!

Merely Instrumental? (1) – Rafart, The Handbook of the Acid Rider

So, I was talking to Brad Birzer a little while back, and he said he wanted me to listen to some recent “instrumental prog,” and to write about it for Progarchy.  Well, sure!  Why not?

Of course, I knew what Brad meant, but I was still rather struck that particular day by the usage of that word, ‘instrumental.’  I teach social theory and philosophy, and in that context, I’m used to the word ‘instrumental’ meaning “serving as a means toward some end or goal.”  I’m also used to that meaning carrying a rather negative connotation at times, as in “merely instrumental,” meaning valuable only so far as it it a means to an end.  I guess it was that sort of connotation that especially hit me when Brad used it, even though he certainly did not mean it that way.  (I’m pretty sure his main agenda was to get me to listen to stuff…

IQ’s “The Road Of Bones” Is Astounding

If you haven’t already bought IQ’s recently-released “The Road Of Bones” here’s a public service announcement:

MAKE SURE YOU GET THE BONUS DISC TOO!

CD1 is absolutely stonking (that’s British for ‘good’,) and while most ‘bonus’ discs are rarely a bonus (instead usually filled with oddities and detritus) IQ has actually released something that’s absolutely the opposite.

I consider the The Road Of Bones bonus disc (bones disc? – hur hur!) to be absolutely essential listening. It’s difficult for me to understand why this wasn’t released as a double album – there’s so much top-notch material on these 2 CDs!

For GBP4 on top of the single CD (which is selling at GBP10) you get the bonus disc too. You won’t regret it!

Listen to them, the children of the night. What music they make!

Indeed, what music they make!

The highest accolade I…

Elbow; The Take Off and Landing of Everything.

As a reviewer it is sometimes difficult to stand back from an album that you are reviewing and be objective, not let your personal feelings, or things that are happening in your own life colour your perception of the album, and make the review all about you, and not about the album. Sometimes however the parallels between the album and experiences you have had or are going through make this difficult, and it seems that with every track the artist has seen into your soul and written songs all about you. This is where I come into Elbows new long player, the Take off and Landing of Everything. For the uninitiated Elbow are a Lancashire based quintet of Guy Garvey, Mark Potter, Craig Potter, Richard Jupp and Pete Turner, and have been working as Elbow since 1997. The Take off and Landing of Everything is their 6th studio album, and… 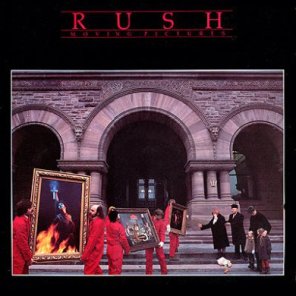 It was a beautiful spring day.

At least so it seemed. The calendar said it was still February, so officially were still in winter. But Winter 1981 in Lexington, KY, was unseasonably warm.

On that fateful afternoon, I met up with my friend Greg Sims at the end of the school day. We hopped into his Chevy Monza (or, ‘The Monza-rati’ as we called it) and he drove me over to the K-Mart on New Circle Road. I went in, quickly located a copy of the new Rush album, Moving Pictures, made my purchase, and headed back out to the car. Greg gave me a ride home, and then took off, as he had to work while I had the night off from my job.

I don’t remember the exact day it was when I made this purchase, but it likely was the same day the…

The first Rush album I bought was A Farewell To Kings – it was a cutout*, and I had heard they were a pretty good progressive rock trio. Geddy’s vocals turned me off initially, but Neil’s lyrics were very intriguing. The next album I acquired was Permanent Waves, because “Spirit of Radio” was all over the radio, and Geddy’s voice had mellowed a bit. That album remained in permanent rotation on my dorm room’s turntable for months, and I still listen to it often. Moving Pictures upped the ante even more, and Rush were becoming one of my all-time favorite bands. However, to my ears Signals was a letdown – the pervasive whoosh of synthesizers seemed to overwhelm Alex’s guitars, and the melodies weren’t as memorable as those in Moving Pictures. So I skipped Grace Under Pressure, convinced that Rush’s…

Arjan Lucassen has just released the following on Facebook:

Time has come to finally disclose my new project… it will be a collaboration between my favorite female singer Anneke van Giersbergen and me! Expect an epic concept double album, a combination of ‘classical meets metal’ and ‘acoustic folk’. More details later! 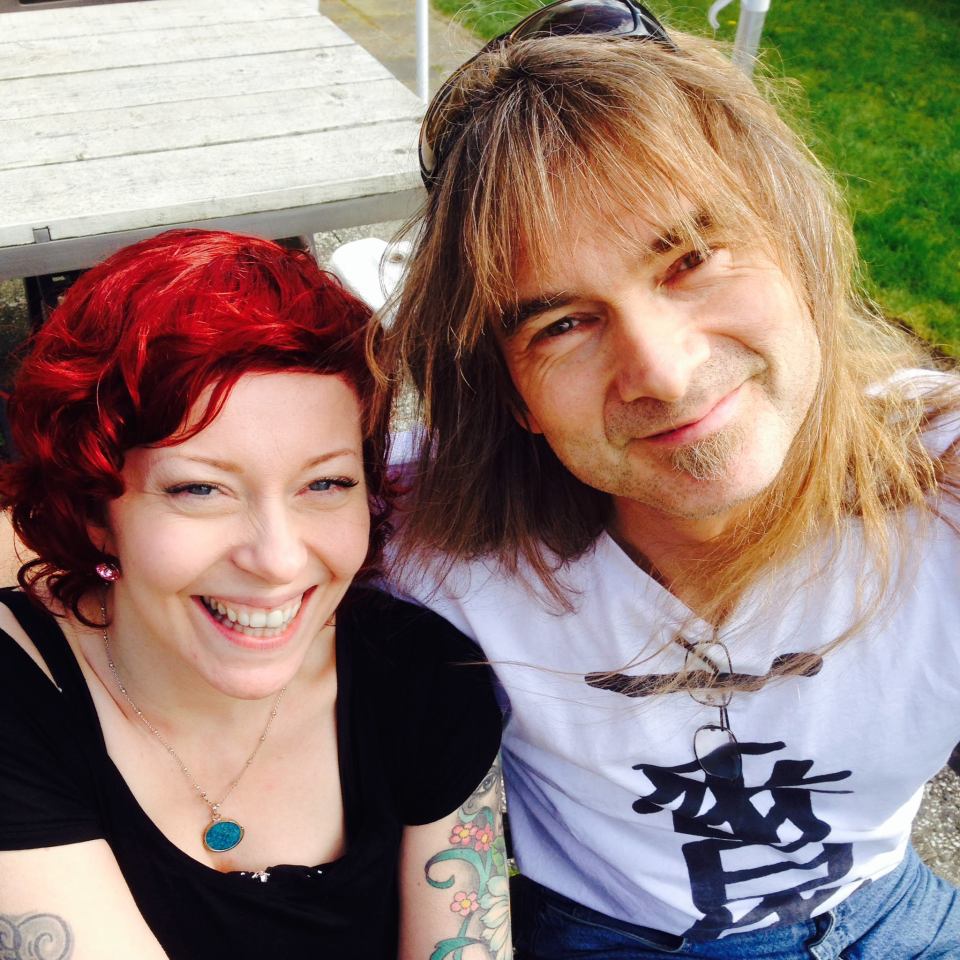 When asked about the sources influencing the writing of the Declaration of Independence, the venerable third president of the United States answered: “This was the object of the Declaration of Independence.  Not to find out new principles, or new arguments, never before thought of, not merely to say things which had never been said before; but to place before mankind the common sense of the subject, in terms so plain and firm as to command their assent, and to justify ourselves in the independent stand we are compelled to take.  Neither aiming at originality of principle or sentiment, nor yet copied from any particular and previous writing, it was intended to be an expression of the American mind, and to give to that expression the proper tone and spirit called for by the occasion.  All its authority rests then on the harmonizing sentiments of the day, whether expressed in conversation, in letters, printed essays, or in elementary books of public right, as Aristotle, Cicero, Locke, Sidney, etc.”

Section 2: I.D.s./Definitions  There were will be four possible terms on the exam; you will need to answer 3 (and only 3) of them.  Each one will be worth 10% of your final examination grade.

Having finally turned the corner on a brutal, 11-day (and counting) cold, I feel up to getting back to my blogging routine. First up: a followup to last month’s post, “Why So Little Decentralization?”

I went through two explanations that do not actually explain the…