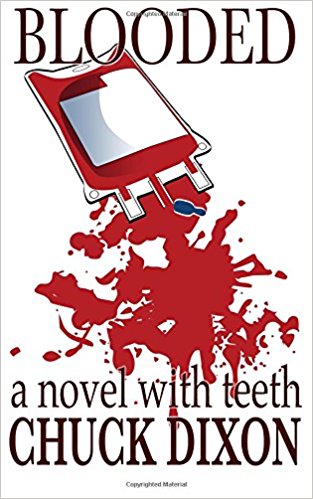 Blooded is a gripping, driving, and, at times, disturbing story of a real estate agent who becomes stupidly amorous with a hookup in a bar.

The next morning, he finds that his “score” is really a vampiress, and she’s turned him into a vampire as well.  Though we know next to nothing about the protagonist, we quickly and rather sympathetically follow his exploits as he has to figure out how to live this new life.

We learn of him—in a genius aspect of Dixon’s writing—only by the choices he makes from that fateful morning forward.  Does he embrace the new lifestyle?  Does he keep his old morality (which, from what little the reader knows, was already pretty shady)?  Does he remain a human who now has supernatural powers (and limits)?  Or, does he become the monster he must become to survive in this new form?

Admittedly, I’ve been a huge Chuck Dixon fan for slightly less than three decades.  Just as I was in my last years of college, Dixon began to write the Batman, Nightwing, and Robin comics for DC.  Certainly, he will be remembered for co-creating one of Batman’s best villains, the communist Frankenstein, Bane.  This is no small feat.  No superhero in superherodom has better villains than Batman, in DC, Marvel, or any other fictional universe.  The Joker, Ra’s Al Ghul, Mr. Freeze, Poison Ivy, Two Face, Harley Quinn, Bane.  What a lineup.  Even in the recent Gotham TV series, the Penguin and the Riddler have finally become somewhat menacing.

But, Bane, is simply formidable, and he has been from the moment Dixon created him.  And, for what it’s worth, Dixon is my favorite writer in the Batman universe.  And, since I’m pretty much a DC/Batman guy, this is saying a lot.

Blooded is the first novel I’d read by Dixon, though I’ve been reading him since at least 1989.  I wasn’t quite sure what to expect from his long-form fiction.  Whatever I expected, it wasn’t that I would be so gripped by the novel that I could barely put it down.  For better or worse, I was in the middle of grading finals when I downloaded the kindle version of Blooded.

Twice a year—during the grading of finals—I always allow myself a special treat.  When I was younger, I might give myself 20 minutes of a video game for every five or six finals graded.  As I’ve gotten older (and video games have not gone over well in the steadiness of my now fifty-year old brain), I’ve turned to listening to twenty minutes of music or reading something for pleasure for twenty minutes.  Let me just state that with Blooded, I majorly violated my rule, becoming utterly lost in Dixon’s rather demented and fetching story. (I did, by the way, finish all of my grading.  I’m sure you were worried).

In terms of writing style, Blooded is a beauty.  Imagine the crispness of Hemingway, the noir aura of Chandler, and the imagination of Stephen King—and you’ll arrive at Blooded.  No, I’m not exaggerating.  Another aspect of Dixon’s writing genius is that we discover the nuances of his world as his protagonist does.

I will admit, there were at least two parts of the book that made me queasy, but, it was worth it.  The queasy parts were a little too descriptive in the flow of blood.

Just two additional thoughts on what I consider a must-read murder mystery-type horror story.  First, the ride just never stops.  If I was upset at the end, it was simply because I wanted to read more.  I didn’t want the ride to end.  There are a lot of characters and ideas left to explore, though Dixon certainly ties up all the plot points.  Yet, he leaves us hungry (ok, cheesy word here) for more.

Second, I really admire what Dixon does with his vampire universe.  To my mind, no one has written a successful vampire story—with the very important exception of Justin Cronin—since Stephen King wrote his finest novel, Salem’s Lot.  While I would never read Twilight or watch True Blood, I know what their writers do—they romanticize the vampires.  As Dixon makes clear from the opening chapter of Blooded, there is absolutely nothing good about vampirism.  They are the piranhas of the supernatural world, relentless hunters, driven by stealth, death, and destruction.  You might as well love a communist or a Nazi as love a vampire.  Or, you might as well be sympathetic to a crack addict and hope his addiction spreads to the general population.

If you’re looking for a great read, look no further.  Not only will you be highly entertained, but you’ll also be given a lot to think about.