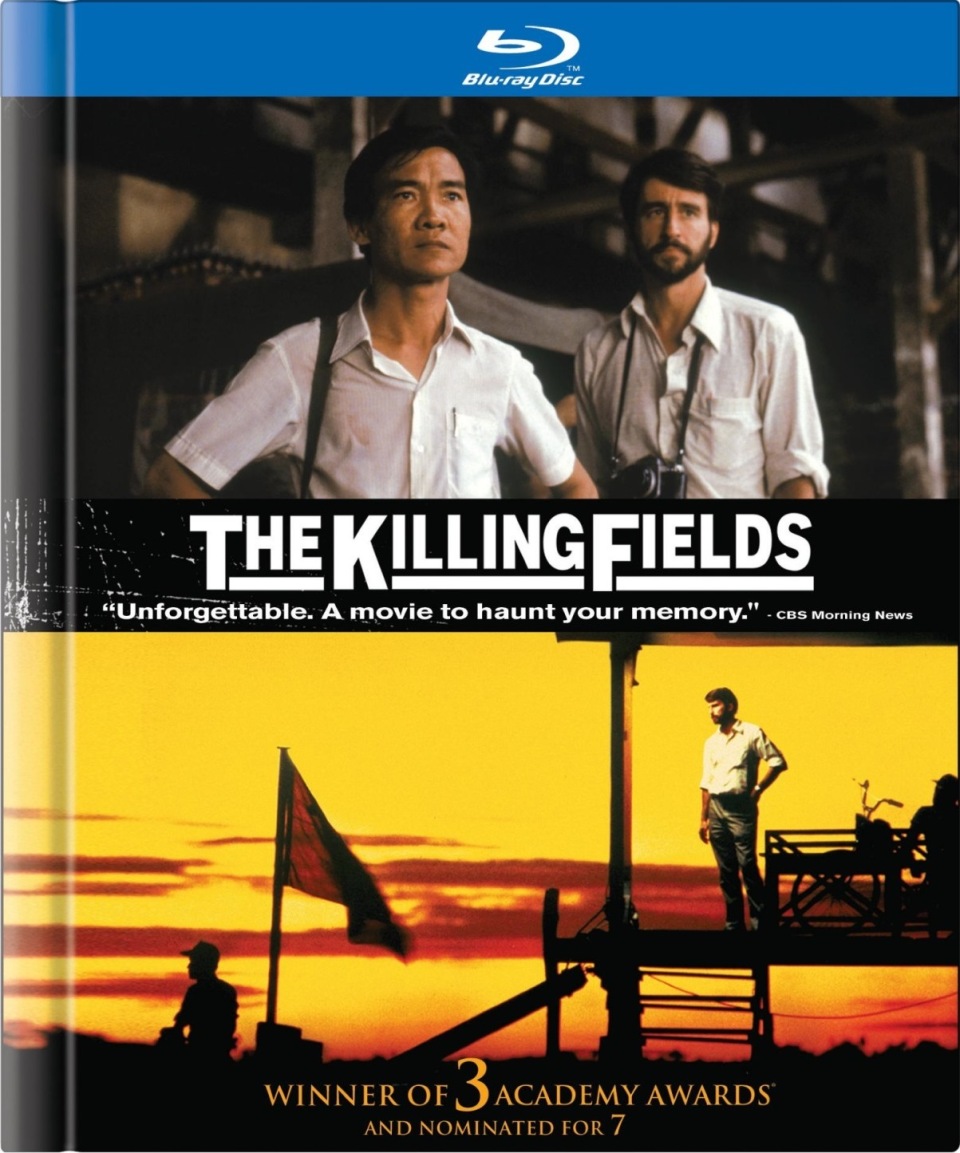 Based on the true events of a New York Times employee, Dith Pran, (a native Cambodian; Khmer) who has to escape the Cambodian gulag, ca. 1976, the movie follow Pran through his horrific and terrifying escape from the Khmer Rouge, a journey that took four years from beginning to end.

The actor who played Dith Pran, Dr. Haing Ngor, had experienced almost the exact same persecution and escape from his native country.  Ironically, Haing Ngor escaped from Cambodia only to be mugged and murdered in the driveway of his Chinatown-Los Angeles home in 1996.  The two main characters of the movie—Sidney and Pran—separate in 1975 after the fall of Phnom Penn but reunite in 1979 at the conclusion of the movie, as they had in real life.

In the late winter/early spring of 1985, I attended a showing of the most immersive and artful movie I had yet encountered in my life, Roland Joffe’s The Killing Fields.  Growing up in a Goldwater household in a conservative Kansas town, I was nothing if not a pure-Reaganite, a student (such that only 17-year olds can be) and hater of ideologies of the left and the right.  Growing up in a rather idyllic setting, however, meant that my view of the world was rather limited.  I knew how horribly the ideologues of the world treated their citizens, but I certainly had nothing but my reading to go on.  I felt for the Russian people, but they were also as distant to me in central Kansas as were the Martians.  I knew a lot, especially for a teenager, but it was all from books.  The Killing Fields opened entirely new worlds to me.  It made the horrors of communism palpable in ways even the greatest books could not.  And, it demonstrated to me—rather conclusively—that cinema can reach the level of art as well as any other medium.  I still consider it the single greatest movie I have ever seen, and I watch it yearly.  Only weeks after watching the movie in the theater, I wrote my entrance essay for the University of Notre Dame on a “work of art that changed my life.”  I chose, not surprisingly, The Killing Fields.

The Kingdom of Cambodia, a French colony, was one of the most stable countries in southeast Asia in the 1960s.  Industrializing and converting, quickly, to Christianity, the country enjoyed a prosperity that eluded its neighbors, Vietnam and Laos.

In 1969, President Richard Nixon began a secret, illegal, and unconstitutional incursion into Cambodia, correctly believing that Vietnamese communists were using rural parts of the country to transport weapons from North Vietnam to South Vietnam.  He ordered carpet bombing as well as the establishment of military bases in Cambodia.  The U.S. and the communist struggle quickly destabilized the region, radicalizing many of the already radical elements in the country.

The most important of the insurgents were a group of existentialist communists, the Khmer Rouge (Red Cambodians) under the leadership of Pol Pot (assumed name and title) and his organization, The Ankor (The Organization).  Pol Pot (1925-1998) was born, Saloth Sar.  Though a Roman Catholic and a devout Jeffersonian coming out of high school, Sar attended university in France.  While in Paris, from 1949 to 1953, he came under the influence of several Marxists and, especially, under the influence of the radical former Nazi-collaborator turned communist, philosopher Jean Paul Sartre (1905-1980).

When Sar returned to Cambodia in 1953, he allied himself with Vietnamese communists and dedicated himself to the overthrow of western society in Cambodia and took the name Pol Pot.  He and the Ankor, his organization led by a number of PhD students from France (all Cambodian), became the center of Marxist revolution.

Their Marxism, perhaps the most radical ever to gain power anywhere, was existentialist and anti-urban to the extreme.  In a way that seems a pure contradiction to most in the West, Pol Pot fused Marx and Jefferson, taking the hatred of the wealthy from the former and the fear of cities from the younger, agrarian Virginian.

When South Vietnam fell to the communists (April 1975) and the Americans abandoned their long-time allies, Cambodia fell to the Khmer Rouge.  Immediately upon taking over the country, the Khmer Rouge forced all Cambodians out of the cities, putting them to work (mostly “make work”) throughout the countryside.

Any person with any religious background at all, with any education past 8th grade, and with foreign language skills (anything other than Khmer and French) was immediately executed.  Any display of emotion—happiness, sorrow, anguish—also led to immediate execution, as emotions were defined as middle-class constructs.

During the three years the Khmer Rouge controlled the country, they murdered nearly 1 out of every 2 Cambodians in what has infamously been named “The Killing Fields,” a term that is now nearly synonymous with the Gulag and the Holocaust Camps.  While the Soviets killed 62 million of their own citizens over their existence, the Chinese Communists 65 million, and the Nazis 21 million, the 4.5 million who were murdered in Cambodia seems a pittance.  But, it must be remembered that not only did this represent nearly ½ of the entire Cambodian population but that these murders were committed in a mere 3 years.

The members of the Khmer Rouge also began to kill one another—much as the French Revolutionaries had done to one another, post 1791/92—in attempt to “purify” the Marxism of their own revolution.  As Russell Kirk wisely noted, revolutions have a tendency to eat their own children.

Tired of the instability and unpredictability of their neighbors, the Vietnamese Communists overthrow the Khmer Rouge in 1978, establishing a puppet communist government.  Pol Pot continued to wage revolution—though with no ultimate effectiveness—until his death in 1998.  The United States, rather insanely, even aided him from time to time, especially in the 1990s, believing him better than his Vietnamese opponents.

The digibook includes exclusive photos as well as nice but relatively superficial write-ups about the producer, director, actors, and real-life subjects of the movie.  Additionally, a few pull quotes from positive reviews of the movie appear.  Sound and visual quality of the Blu-ray, however, makes the purchase worth it.  Each is extraordinary.  As an anti-war war movie, the visuals and audio account for much.  Though this was Joffe’s first major film, he captured human relations as well as the landscape beautifully.  In particular, Joffe captured the sultry colors of humid southeast Asia, while never neglecting the dirt, smoke, and dust of war and the grime, blood, and muck of the gulag.  The blu-ray reveals the depths, nuances, and layers of Joffe’s artistry in ways that VHS and DVD simply could not.

Best of all, though, the Blu-ray includes Joffe’s commentary on the movie.  He discusses its strengths as well as its weaknesses (really, only one—ending the movie with the evil John Lennon anthem, “Imagine”).  He also, though, reveals the secret to its long and now timeless success as a work of art—whatever the backdrop, The Killing Fields is really a movie about two things: the human condition and the essence of love.