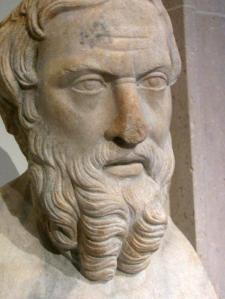 But Xerxes was not persuaded any the more.  Four whole days he suffered to go by, expecting that the Greeks would run away.  When, however, he found on the fifth that they were not gone, thinking that their firm stand was mere impudence and recklessness, he grew wroth, and sent against them the Medes and Cissians, with orders to take them alive and bring them into this presence.  Then the Medes rushed forward and charged the Greeks, but fell in vast numbers: others now took the places of the slain, and would not be beaten off, though they suffered terrible losses.  In this way it became clear to all, and especially to the king, that though he had plenty of combatants, he had but very few warriors.[1]

The Greeks—organized in units by their respective towns—continued to fight, despite suffering severe wounds and being greatly outnumbered.  After days of battering, the Greeks decided to break up their defense.  Some would stay, others would return to their respective city-states to warn them and to help them prepare for a defense.  The Spartans, under the leadership of King Leonidas, decided to stay.  The Oracle had prophesized either greatness or ruin for them, and they believed they would attain the former through sacrifice.  Should they flee to defend their homes, Leonidas believed, all would be lost.  Allied with the Thespians, who refused to abandon the Spartans, Leonidas and three-hundred men made their last stand.  They drove themselves to the heart of the narrow pass at Thermopylae.  There, they freely drove themselves into the Persians, mostly conscripts, being forced to fight by bullwhips at their backs.  Leonidas threw himself into the invading force and died quickly.

Drawing back into the narrowest part of the pass, and retreating even behind the cross wall, they posted themselves upon a hillock, where they stood all drawn up together in one close body, except only the Thebans.  The hillock whereof I speak is at the entrance of the straits, where the stone lion stands which was set up in honour of Leonidas.  Here they defended themselves to the last, such as still had swords using them, and the other resisting with their hands and teeth; till the barbarians, who in part had pulled down the wall and attacked them in front, in part had gone round and now encircled them upon every side, overwhelmed and buried the remnant which was left beneath showers of missiles.[2]

Overwhelmed by the numbers of Persians, the Greeks fell quickly.  As they did, they continued to fight, inspired by one officer declaring “If the Medes darken the sun, we shall have our fight in the shade.”[3]

The mission at Thermopylae was vital to the defense of Hellas itself.  For, as Leonidas and his three-hundred Spartans sacrificed their lives, attempting to hold the pass at Thermopylae against the horde of Persian invaders, Athens had time to prepare a defense.  When the last Greek died, the West was born.