One of the coolest moments of my career, interviewing Mike Church–The King Dude–five years ago.  A great man with great ideas. 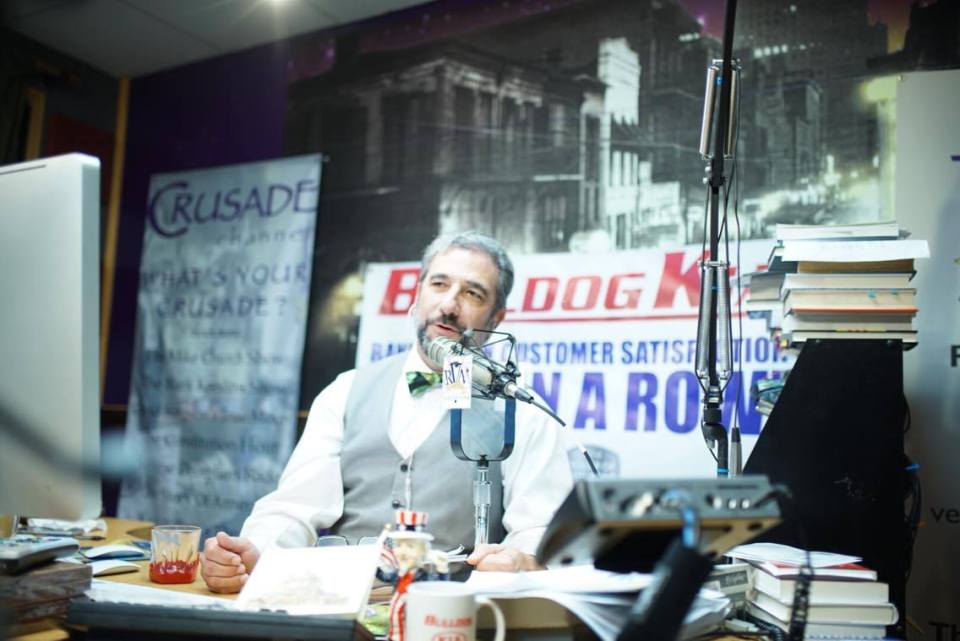 Mike Church, Master of the Airwaves

Bearers of the Word: The Incomparable Mike Church

I don’t think I could exaggerate my respect for conservative (small “r” republican) radio host Mike Church as a person and as a personality.  A man of immense tenacity, curiosity, and intelligence, Church has become one of the most interesting figures in national media.  Though many of his competitors commodify and debase conservatism, Church reads, explores, and questions the most significant issues of our day.  He explores the past and honors those who came before us, but not uncritically.

This is not to suggest that all readers of CatholicVote will agree with Church on many issues.  But, knowing Church, he wouldn’t want you to.  Indeed, one of his most interesting features is his willingness to debate allow his allies and opponents be. . . Well, individual.

Most famous for his Sirius/XM radio show, Church is also a brilliant film maker, humorist, satirist, and musician.  I am deeply honored Mike consented to this interview with me.  He probably has many better things to do with his time, so I’m especially happy he consented to talk with me.

BB: Please tell us a bit about yourself.

MC: I was born in 1962 into a very Catholic family, we lived in New Orleans. I spent my childhood and young adult growing up in Va Beach VA and my mother pulled us out of the Catholic church opting instead for the then very young and loud “Rock Church” which had its roots watered by Pat Robertson. When I graduated high school I moved back to New Orleans and in with my father, I have lived here ever since. I started in radio in 1992, interned at WSLA in Slidell LA and worked nearly a year there for the experience. From there I traveled to 5 states and 6 radio stations, worked 6 years holding down 2 and 3 other jobs to support what my family called my “radio hobby”. I kept working at the business and learning to be a good broadcaster and by 1998 I was recruited by stations in top 50 markets like WBT in Charlotte NC. Tired of the constant uncertainty and gypsy like lifestyle that terrestrial radio was becoming I saw an opportunity to get in on the ground level of Satellite radio and have been here at Sirius/XM ever since.

BB: How did you come to Catholicism?

MC: When I met my 1st wife who was a devout Catholic I resolved to enter the adult RCIA and get married in the Church, I have been a Catholic ever since (still need to beg the Pope’s blessing on the divorce though). I don’t think I was ever a very devout Catholic though until very recently when I discovered the Extraordinary Mass. I actually feel like I was getting a non-catholic version of catholicism now and the High mass has set me on a new course of discovery in faith.

BB: Who do you think the significant Catholics are today?  Why?  What distinguishes them?

MC: I would have to stretch to answer that question because so many have been so marginalized, is there such a thing as a significant Catholic in a world that disparages the tradition of high mass? Regis Philbin comes to mind. Pat Buchanan still stands up for the church and even wrote a beautiful defense of it in his last book, Suicide of A Superpower. Pope Benedict seems to be locked in a struggle within the Church as he tries to bring back fundamental-sacred rites to the church. This may be the biggest struggle of our faith, the internecine conflict between the remaining conservatives in the holy order who see faith and tradition itself as the bulwark of the church and those who see the church as a political force that holds weekly ceremonies too. Oh, and of course you Brad!

BB: How do you bring your faith into your work?

MC: I am always eager to tell a story of Catholics in history to the audience and play up those heroes faith or influence by people of faith. There is a story of Our Lady of Prompt Succor here in NEw Orleans where her sacred statue rests. Andrew Jackson on his way to the Battle of New Orleans stopped by the Ursuline Convent in the French Quarter and prayed with Sister Saint Michelle. She asked Our Lady to intervene on Jackson and his army’s behalf and Jackson is said to have stopped at Ursuline on his way out of New Orleans to pay respect to Our Lady. I also like challenging the audience’s aversion to putting faith above things. That sometimes, maybe, the “good life” is seeing how Christ works his miracles all around us and recognizing that this happens in SPITE of our actions. But when we stop and let him in we may be just a little more inclined to acknowledge his presence instead of our greatness.

I am fond of asking my TV audience in New Orleans to list the things that are missing from 2012 that may have been around when this city was the South’s crown jewel. My number one answer is our Catholic traditions, devoutly honored and observed. Government has replaced God in this inner city as in so many others and I wonder when civic leaders of all faiths will recognize and ACT on that.

BB: What do you see as the future of the Catholic faith?

MC: I must admit that answering this question in now way inures the reader to accept the prediction! To me, the Holy Church cannot survive and thrive without it being exceptional and I don’t just mean in name only. The beauty of the Sacrements needs to be frontmost in our canon and for them to bear that burden they will need to be as they always were as my friend Tom Woods wrote “Sacred Then and Sacred Now”. This means some painful times for the hierarchy as they basically make their mortal way through a contrition of sorts in this restoration. The first Extraordinary High Mass I attended was said by an 85 year old Priest of Indian heritage. His homily had and has an impact on my thinking on this subject. He said that the Church has suffered many ignominious stains on its reputation in the last 40 years and this continues. But, we should not complain so bitterly about that and instead should correct those faults and sins and get back to being and defending what we are: The only Church founded by Jesus Christ himself. In this way we set the example for the other faiths of Christianity to follow and live up to.