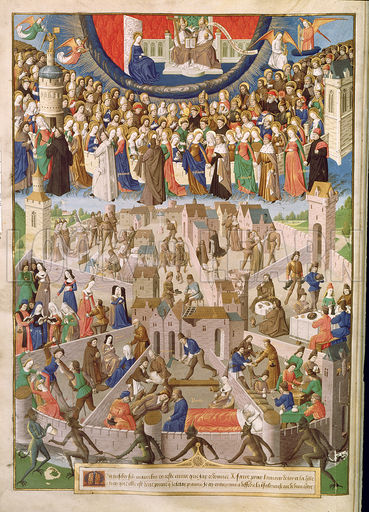 “Nature makes nothing in vain,” Aristotle, the great Pagan philosopher of ancient Athens, understood.  Aquinas concluded Aristotle’s argument fourteen centuries later with “only Grace perfects nature.”   Following St. Paul’s letters in the New Testament, St. Augustine, eight centuries before Aquinas and seven centuries after Aristotle, wrote: “All natures, then, inasmuch as they are, and have therefore a rank and species of their own, and a kind of internal harmony, are certainly good.  And when they are in the places assigned to them by the order of their nature, they preserve such being as they have received.”[1]  Nothing could sum up the argument of the Christian Humanists better than the arguments of these three men, one pagan and two Christians: Aristotle, St. Augustine, and St. Aquinas.  Everything has its place, its role, its purpose, singular to it, known and understood only fully by the Divine Author, who placed each person and thing in His story, what a monk at the Anglo-Saxon monastery at Lindesfarne called “God’s Spell,” or the Gospel, in 950.  The story in which we as human persons participate began with Creation, reached its middle and highest point with the Incarnation, the Death, and the Resurrection of Christ Jesus, and will end with the Apocalypse.  The end will come when it comes.  Even Jesus claimed not to know His Father’s mind and desires on the subject.  Each of us, then, as members of the story, has our role.  Some roles are greater, some are lesser, but each has an intrinsic importance.  We may neglect our role, we may pervert our gifts, or we may freely give up our free will, through Grace, and submit to God’s Will.  St. Augustine challenged his readers:

Choose now what you will pursue, that your praise may be not in yourself, but in the true God, in whom there is no error.  For of popular glory you have had your share; but by the secret providence of God, the true religion was not offered to your choice.  Awake, it is now day; as you have already awaked in the persons of some in whose perfect virtue and sufferings for the true faith we glory: for they, contending on all sides with hostile powers, and conquering them all by bravely dying, have purchased for us this country of ours with their blood; to which country we invite you, and exhort you to add yourselves to the number of citizens of this city.[2]

These are our choices as beings created in the image of God.  Infinitely diverse, we make up either Christ’s Army or the Army of the Enemy.  If we chose to use our gifts, as they were intended in the Economy of Grace, we do so as the Church militant, transcending time and place, but also rooted in time and place.  As the great medieval theologian, Hugh of St. Victor, wrote:

For the Incarnate Word is our King, who came into this world to war with the devil; and all the saints who were before His coming are soldiers as it were, going before their King, and those who have come after and will come, even to the end of the world, are soldiers following their King.  And the King himself is in the midst of His army and proceeds protected and surrounded on all sides by His columns.  And although in a multitude as vast as this the kind of arms differ in the sacraments and the observance of the peoples preceding and following, yet all are really serving the one king and following the one banner; all are pursuing the one enemy and are being crowned by the one victory.[3]

More recently, the great American Augustinian Russell Kirk put it succinctly at the end of his autobiography: “This present life here below, Kirk had perceived often in the mind’s eye, is an ephemeral existence, precarious, as in an arena rather than upon a stage: some men are meant to be gladiators or knights-errant, not mere strolling players.  Swords drawn, they stand on a darkling plain against all comers and all odds; how well they bear themselves in the mortal struggle will determine in what condition they shall put on incorruption.  His sins of omission and commission notwithstanding, Kirk had blown his horn and drawn his sword of imagination, in the arena of the blighted twentieth century, that he might assail the follies of the time.”[4]

Through the gift of Grace, we use our moral imagination as a means to understand our place in the universe, to know our role in God’s Creation, to understand our citizenship in the City of God, and to advance true culture, rooted in the cultus.  Indeed, far from being original, the Augustinians saw themselves as identifying timeless Truths and escaping what C.S. Lewis called “chronological snobbery.”  The Augustinian believes that the “past and present are one—or, rather, that the ‘present,’ the evanescent moment, is infinitely trifling in comparison with the well of the past, upon which it lies as a thin film.”[5]  They distrust originality, as it smacks of pride and, consequently, sin.  “Heaven may be perpetual spring,” Kirk continued. “Those men and women who fail to perceive timeless moments are the prisoners of time and circumstance.  Only by transcending the ravenous ego, and sharing their joy with others, do mortals come to know their true enduring selves, and to put on immortality.  What Hell symbolizes is imprisonment within the ego, in the winter of discontent.”[6]  Hence, with Burke, they believe in the contract of eternal society, between the dead, the living, and the yet to be born.  No single generation has the right to overturn what came before and determine what comes after.   “We must picture the race extended in time,” Lewis warned in The Abolition of Man, “from the date of its emergence to that of its extinction.”[7]  Otherwise, we become tyrants over all those who come after us, and we fail to serve as stewards, as God commanded in Genesis.  Exploration of these timeless truths, Pope John Paul II has urged, will allow a “splendid programme: to create beauty, to draw from the good, to understand and express the truth!”[8]

Submission either to God or to Ego determines our mortal allegiance, and, ultimately, our true immortal citizenship.  “Two cities have been formed by two loves: the earthly city by the love of self, even to the contempt of God; the heavenly by the love of God, even to the contempt of self,” St. Augustine argued.  Christians live in the City of Man, but exist as pilgrims through this world, as citizens of the City of God.  “The former, in a word, glories in itself, the latter in the Lord.”[9]  St. Augustine wrote, “these two cities are entangled together in this world, and intermixed until the last judgment effect their separation.”[10]

To win or lose should not concern us, the Augustinians argue.  Indeed, the war does not belong to us.  It is a war that began with Lucifer’s rebellion, and it will end when God ends it, as foretold by St. John in his dream of the Apocalypse.  Our job, as members of the Church Militant, is to fight the good fight as foot soldiers of Christ.  We do so because it is right, not because we gain glory in the battle.  Indeed, the fight makes life worth living.  “What really makes men love life is the battle itself, the struggle to bring order out of disorder, to strive for right against evil,” Russell Kirk justly claimed.[11]  In the end, though, all glory, all honor, goes to the Creator.  All things, then, come from the One, the Creator, in His Creation, and All things, through His Grace, will come back to Him.  For “the kingdom, the power, and the glory,” are His, and His alone.