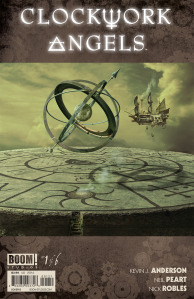 After spending my first afternoon at the University of Colorado, I stopped by Time Warp Comics (http://www.time-warp.com).  As it turns out, Neil Peart, Kevin J. Anderson, and Nick Robles have been producing a six-part comic book series of Clockwork Angels.

The first three issues are out, and I was even able to purchase a signed (by Anderson) copy of issue 1.

And, equally important, I found out that several of the guys working at Time Warp are proggers.  They were also just–not surprisingly–fantastic guys (and a gal).  So, a huge thanks to Clayton, Garrett, Michael, and Georgia!

What a store.  I’ll certainly be stopping by again.

If you’re in Boulder, make sure you check out Time Warp.

← Pillage and Plunder – The Show Must Go Wrong
Wings, Time, Everything →