Proud to be in Contemporary Authors 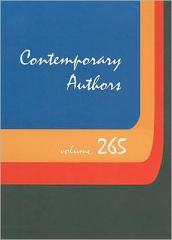 Actually, referencing No. 288. But, Google has this picture, so I grabbed it.

Just found this a few minutes ago.  Ego is very, very happy at the moment.

In 2002, Birzer published J.R.R. Tolkien’s Sanctifying Myth: Understanding Middle-Earth. Birzer’s study examines the work of J.R.R. Tolkien in light of his Catholic beliefs. In a laudatory review in Modern Age, James E. Person, Jr., found that “Dr. Birzer gives every indication of having read and ably apprehended everything of significance written by and about Tolkien, and that is no small accomplishment.” Person went on to explain that, “as Birzer demonstrates, while many people of every religious persuasion have enjoyed The Hobbit (1937) and The Lord of the Rings, there is something more than a deeply moving read in Tolkien’s complex mythology of Middle-earth, with its men, wizards, elves, orcs, dwarves, and other creatures.” According to Person, “This becomes startlingly plain when these works are examined within the fuller context of Tolkien’s letters, The Silmarillion (1977), and his little-known, unpublished sequel to the Ring trilogy, an unfinished fragment called ‘The New Shadow,’ along with several other works.”

Other reviewers were likewise impressed with J.R.R. Tolkien’s Sanctifying Myth. Ray Olson, writing in Booklist, called the book “essential reading for all Tolkien enthusiasts” and declared that “Birzer reveals The Lord’s Catholicism in five riveting chapters.” A reviewer for Publishers Weekly considered the book “a fine tribute” to Tolkien and observed, “Birzer is a fine writer who does a wonderful job of integrating primary sources such as letters … [and] he also includes glimpses of unpublished materials.” In the aforementioned review for Modern Age,Person stated, “Readers of Birzer’s fine study will see with fresh eyes how Tolkien’s legendarium of Middle-earth likewise restores myth to its rightful place, not as a purveyor of ‘lies breathed through silver,’ but as a conduit of truth. J.R.R. Tolkien’s Sanctifying Myth is rounded out by a well-selected bibliography of secondary sources, with most of the entries citing fairly modern studies of Tolkien’s works.” Person deemed the book “a ‘must-have’ for any student or interested reader seeking to understand more fully perhaps the most remarkable writer of the twentieth century–and not only to understand, but to enjoy: a sterling accomplishment for any writer.”

Birzer told CA: “Words–as definitions, as concepts, and as art–have intrigued me since early grade school. Much of this early love stems from a religious (specifically, Roman Catholic) upbringing–especially with God speaking the universe into existence, Christ as the Word Incarnate, etc. At age ten, I also read J.R.R. Tolkien’s Ainulindalë, the story of creation in The Silmarillion, repeatedly. Again, the notion of words and song as power captivated me, and Tolkien’s ideas continue to influence me to this day. Indeed, I can’t read Genesis without imagining the song of Ilúvatar. After devouring Tolkien as well as Ray Bradbury, I tried rather unsuccessfully to write a number of fantasy stories, but I realized very quickly a love for nonfiction. So, while I read all the science fiction and fantasy I could, I began writing nonfiction. I wrote my first voluntary research paper for my fifth-grade teacher. He had been a Korean War vet, and I wrote on the European theater of World War II. Other research papers followed: on the Middle Ages, NASA, the history of Hong Kong, and anything else that interested me. I found that I liked research as much as I enjoyed writing.”

When asked who or what influences his work, Birzer explained: “The three authors I hope have influenced me most are J.R.R. Tolkien, T.S. Eliot, and Joseph Pearce. Tolkien, of course, for his imagination and voice. He’s a master of each, and, as his obituarist wrote, ‘he had been inside language.’ Comparable only to Tolkien in his understanding and employment of words is T.S. Eliot. Taken together, The Wasteland, The Hollow Men, Ash Wednesday, and the Four Quartets serve as modernity’s Divine Comedy. Eliot also understood the continuity of all traditions and all voices in our own creations. Finally, our best contemporary biographer is the tenacious Joseph Pearce. No one, I believe, has the ability to get into the mind (and soul) of his subject better than Pearce. Endowed with this unique insight, Pearce always has something of importance to write and to renew our hope in virtue and a life well lived.

“Generally, I like to immerse myself in a topic before I write on it. Or, more typically, I’ve already been immersed in some topic when I decided to write on it. I’ve wanted to write on Tolkien since I first encountered his work in 1977. Though I’d heard of Christopher Dawson, I didn’t read him until Thanksgiving 2001. At the moment I finished his The Judgment of Nations, I knew I wanted to write him. Other subjects, such as the intellectual biography of Charles Carroll of Carrollton, came by invitation. Once I’ve decided on a subject, though, I try to find every primary source possible, in libraries, periodicals, and archives. I also try to avoid secondary sources until after I’ve completed my research. When researching, my goal is to leave no page unturned, to leave no source undiscovered, and to have found something that no other writer has yet seen.

“The most surprising thing I have learned as a writer is how indescribably satisfying and spiritual a good day of writing is.” Birzer then explained that his favorite book that he has written isSanctifying the World “because of the necessity of understanding Dawson’s arguments about the meaning of the human person, about the nature of good and evil, and about community as we continue through the twenty-first century.”

“I hope and pray that every one of my books will capture and promote the dignity of each individual human person in creation–past, present, and future.”

FURTHER READINGS ABOUT THE AUTHOR:

Thanks so much, Gale Thomson!